The idea for Hispanic Heritage Month, celebrated throughout the latter half of September and the first half of October, began as a way to promote the history, culture, and contributions of Hispanic-Americans — specifically, those whose ancestors came from Spain, Mexico, the Caribbean, and Central and South America. Communities mark the achievements of Hispanic and Latino Americans with festivals and educational activities.

A special dateHispanic Heritage Month starts in the middle of the month to correspond with the independence of many countries like Costa Rica, El Salvador, Guatemala, Nicaragua, Mexico, and Chile.

Going strongHispanic and Latino Americans amount to an estimated 17.8% of the total U.S. population, making up the largest ethnic minority.

And the winner is…Oscar Hijuelos, author of “The Mambo Kings Play Songs of Love,” was the first Hispanic writer to win a Pulitzer Prize for Fiction.

Difference of opinionUnlike the U.S., chicken tacos are not popular in Mexico. There, they prefer to fill their tacos with steak, chicharron, and chorizo.

Hispanic Heritage Month is an annual celebration of the history and culture of the U.S. Latinx and Hispanic communities. The event, which spans from September 15 to October 15, commemorates how those communities have influenced and contributed to American society at large.

The term Hispanic or Latino (or the more recent term Latinx) refers to a person’s culture or origin—regardless of race. On the 2020 Census form, people were counted as Hispanic or Latino or Spanish if they could identify as having Mexican, Mexican American, Chicano, Puerto Rican, Cuban, or “another Hispanic, Latino, or Spanish origin.”

Here’s a look at Hinduism, the world’s third largest religion after Christianity and Islam. “Hinduism” is derived from a Sanskrit word that means “dwellers by the Indus River.”

Fruit, alcohol and starchy foods should be consumed only sparingly, but do not need to be cut out from the diet. Not all carbohydrates are harmful, and whole grains, legumes, and other nutritious high-carbohydrate foods can be beneficial because of the nutrients they provide and because they do not raise glucose levels quickly.

Dinosaurs would swallow large rocks which stayed in their stomach

It was originally called Decoration Day

To honor the deceased, soldiers would decorate graves of their fallen comrades with flowers, flags and wreaths. Hence Decoration Day. Although Memorial Day became its official title in the 1880s, the holiday wouldn’t legally become Memorial Day until 1967.

Unlike dogs, cats do not have a sweet tooth. Scientists believe this is due to a mutation in a key taste receptor.[5]

When a cat chases its prey, it keeps its head level. Dogs and humans bob their heads up and down.[12]

The technical term for a cat’s hairball is a “bezoar.”[8]A group of cats is called a “clowder.”[9]

A cat can’t climb head first down a tree because every claw on a cat’s paw points the same way. To get down from a tree, a cat must back down.[12]

Many people in China consider cats a “warming” food that is perfect to eat during the winter every year, nearly four million cats are eaten in Asia.[10]There are more than 500 million domestic cats in the world, with approximately 40 recognized breeds.[14]

Approximately 24 cat skins can make a coat.[7]While it is commonly thought that the ancient Egyptians were the first to domesticate cats, the oldest known pet cat was recently found in a 9,500-year-old grave on the Mediterranean island of Cyprus. This grave predates early Egyptian art depicting cats by 4,000 years or more.[9]

During the time of the Spanish Inquisition, Pope Innocent VIII condemned cats as evil, and thousands of cats were burned. Unfortunately, the widespread killing of cats led to an explosion of the rat population, which exacerbated the effects of the Black Death.[9]

During the Middle Ages, cats were associated with witchcraft, and on St. John’s Day, people all over Europe would stuff them into sacks and toss the cats into bonfires. On holy days, people celebrated by tossing cats from church towers.[9]

The first cat in space was a French cat named Felicette (a.k.a. “Astrocat”) In 1963, France blasted the cat into outer space. Electrodes implanted in her brains sent neurological signals back to Earth. She survived the trip.[9]The group of words associated with a cat (catt, cath, chat, katze) stems from the Latin catus, meaning domestic cat, as opposed to feles, or wild cat.[3]The term “puss” is the root of the principal word for “cat” in the Romanian term pisica and the root of secondary words in Lithuanian (puz) and Low German puus.

Some scholars suggest that “puss” could be imitative of the hissing sound used to get a cat’s attention. As a slang word for the female pudenda, it could be associated with the connotation of a cat being soft, warm, and fuzzy.[13] 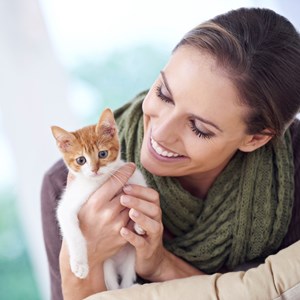 According to Hebrew legend, Noah prayed to God for help protecting all the food he stored on the ark from being eaten by rats. In reply, God made the lion sneeze, and out popped a cat.[12]A cat’s hearing is better than a dog’s. And a cat can hear high-frequency sounds up to two octaves higher than a human.[1]

A a cat can travel at a top speed of approximately 31 mph (49 km) over a short distance.[1]A the cat rubs against people not only to be affectionate but also to mark out its territory with scent glands around its face. The tail area and paws also carry the cat’s scent.[1]

Researchers are unsure exactly how a cat purrs. Most veterinarians believe that a cat purrs by vibrating vocal folds deep in the throat. To do this, a muscle in the larynx opens and closes the air passage about 25 times per second.[12]

When a family cat died in ancient Egypt, family members would mourn by shaving off their eyebrows. They also held elaborate funerals during which they drank wine and beat their breasts.

The cat was embalmed with a sculpted wooden mask and the tiny mummy was placed in the family tomb or in a pet cemetery with tiny mummies of mice.[5]

In 1888, more than 300,000 mummified cats were found in an Egyptian cemetery. They were stripped of their wrappings and carted off to be used by farmers in England and the U.S. for fertilizer.[12]

Most cats give birth to a litter of between one and nine kittens. The largest known litter ever produced was 19 kittens, of which 15 survived.[4]Smuggling a cat out of ancient Egypt was punishable by death. Phoenician traders eventually succeeded in smuggling felines, which they sold to rich people in Athens and other important cities.[9]

The earliest ancestor of the modern cat lived about 30 million years ago. Scientists called it the Proailurus, which means “first cat” in Greek.

The group of animals that pet cats belong to emerged around 12 million years ago.[5] The biggest wildcat today is the Siberian Tiger. 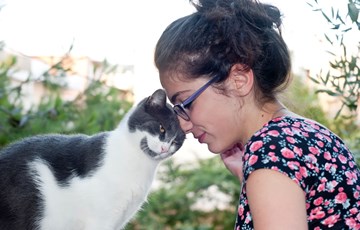 Cats have 300 million neurons; dogs have about 160 million cat’s brain is biologically more similar to a human brain than it is to a dog’s. Both humans and cats have identical regions in their brains that are responsible for emotions.[12

]Many Egyptians worshipped the goddess Bast, who had a woman’s body and a cat’s head.[12]